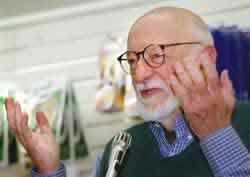 Robert Scholes is Research Professor of Modern Media and Culture at Brown University and author of widely read books about literary theory and criticism.
In his last essay English after the Fall. From Literature to Textuality (University of Iowa Press, 2011), he continues a polemic debate that he had already begun with The Rise and Fall of English (1998) about what should be the content of the curriculum in English departments (obviously his ideas could be applied to any literature department).
In his book, Scholes proposes concrete examples about how teaching can and must try to broaden its object of study going over the traditional frontiers of canonical literature, which in his opinion would help justify the usefulness of the humanistic disciplines, so little appreciated in today’s highly technological world.


Why are the Humanities nowadays “fallen disciplines”?

In a technology-driven world it is hard for the humanities to demonstrate their usefulness, and this situation is made worse by the failure of some humanistic disciplines to acknowledge the humble work that actually makes them useful. For example, in the USA English departments do not see teaching reading and writing as a worthy goal. Instead they teach “literature.”


The meaning of the term “literature” has evolved in history. You quote, for example, Coleridge asserting that “where the reading of novels prevails as a habit, it occasions in time the entire destruction of the powers of the mind” as an example of how fiction was not considered literary until the end of the nineteenth century. What should we then understand as “literature”?

I think the word “literature” is no longer useful and should be replaced by “textuality” as the main goal of instruction in language departments. At present our definitions of literature exclude too many important texts, including sacred religious and political texts and texts in mixed media.


You defend that English departments should not be centered on the study of “literature”, but of “textuality”. Could you explain these two concepts?

“Literature” has come to mean poetry, fiction, and drama of a certain seriousness or difficulty. This definition is too exclusive, and it tends to separate reading from writing. By “textuality” I mean the study of both reading and writing in texts ranging from the Bible and the US Constitution to journalism, film, and television shows, including their advertising.


The importance of criticism


How should a text be read? You propose a process of three levels or phases.

Naive readers tend to impose their own meanings on texts. That is the first phase of reading. The second phase, interpretation, deliberately seeks the original intention of the makers of texts. The third phase, criticism, seeks to evaluate that original intention in our contemporary world.


Why should religious and political texts be included in the curriculum?

These are the texts that influence our lives most directly—the most powerful texts we encounter. We need to understand them well enough to criticize them.

The answer, I believe, is that this God is talking to men about things that they may own and that other men may wish to take from them. In this text, women are not coveters, they are only covetees. Which tells us that this is a culture in which women were treated as a kind of property rather than as owners of property, and the last thing they could claim to own would be a husband.

There are cultures in this world that still operate in a manner much like the one revealed in this sacred text. At the moment, ours is not one of those cultures, though it is clear that there are people who would like to move us in that direction. Those college teachers who choose to teach the sacred texts may help to stop us from going to that dark place.


Could the interpretation and the criticism of religious texts help develop a greater tolerance to other people’s beliefs and ideas?

Possibly, but that is not the main purpose of such study, which is achieve a critical view of our own sacred texts. These texts come to us from another time and place, another culture. Supposedly “fundamentalist” readings actually disguise that by making them seem to speak directly to us. A critical reading involves recognizing the difference between the original situation of a text and our own situation, and consciously deciding what elements of that text apply to our own situation and what elements do not.

What should be studied and why


What do you think about the fact that some critics reject the study of popular fiction because it is not good enough?


What makes a work of fiction good?

There is no simple answer to this question, because there are different kinds of goodness, and only time can tell whether a text has qualities that endure. But such texts tend to tell us things about human nature that continue to be of interest to us, using language that is memorable. Some popular works have these qualities—and so do some unpopular works.


Why would it make sense to broaden the objects of study to include all the media and modes of expression?

This is the world we live in. And important works move from one medium to another. Great plays and novels become operas and films. To function well in our world we need to be able to appreciate and criticize works in all the media we encounter.


In your book it is suggested that teachers and students have to change the way they look at texts in order to combine the perspectives of creator and consumer, writer and reader.

Yes. The best readers can see things from a writer’s perspective, and the best writers understand their readers very well. This means that, in teaching reading, we need to encourage students to write the kinds of texts they are learning to read, and that, in teaching writing, we need to encourage writers to imagine their readers. Better readers make better writers, and better writers make better readers.


How can the study of “textuality” be useful for our lives? Why is it important?

We all use language. And language uses us. Increasing our command of language and the modes of textuality increases both our pleasure and power in this very textual world we inhabit. We need to be able to understand and question the powerful texts that seek to control our lives directly by telling us how we must behave. And we also need the comfort provided by texts that offer us playful versions of painful experiences—and all profane texts are playful, whether tragic of comic in their shape. It is their beauty, their artfulness that allows to contemplate painful events with pleasure and apply these lessons to our own real lives.